skip to main | skip to sidebar

castles in the sky 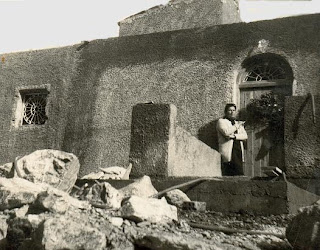 She had written that the weather had been unusually warm for Christmas. I smiled at the picture. It was hers, this positioning of the arms - an expression of containment that was both wary and protective. Her strength, her vulnerability, her withdrawal spoke in the rigidity of the muscles. Her eyes look out at the sea, steadily; the head is turned slightly away from the camera - a pose she learned from the studio portraits so necessary for her career. The never-ending cigarette, the sunglasses worn or pushed up on her hair, are also remnants from a world of practice, clubs, night New York glitter. Two worlds, merged -- there on the mountain with her dogs, her unfinished house and struggling garden.

The land is harsh, her living hard. She carried buckets of water to her makeshift kitchen, and then dishwater was used for the garden. The earth, dry and old, often refused the water - it evaporated in the sun. Contrasts in Greece are vivid: rock, sun, sea. The winds are changeable and strong: the desert dust carried up from the south and the smell of forests down from the north. And the east and west winds play with the waves, carrying hope with the briny smell of salt.
Posted by Bielka at 14:14